I was recently introduced to an interested project called Google Caja. Google Caja is basically a compiler/sandbox that makes user-supplied HTML/JavaScript/CSS safe to embed in your web app. Among other places, it is used in Google Sites and Yahoo Applications. The project is very interesting for a number of reasons from a security research standpoint, and one of those is that a bug in the compiler could lead to a stored XSS in Google sites.

So I played with it a bit to see if I can find any holes. I first found a few bugs that are not exploitable on Google Sites and reported those directly to the Google Caja team. These bugs are not yet fixed so I won't write about them at this time. However, when trying to exploit one of those bugs on Google Sites, I discovered another issue there related to the parsing of user-supplied HTML. This issue can be used to cause a stored XSS in sites.google.com.

In order to understand the issue, let's first look at how Google Sites handled some of the user-supplied HTML input.
Let's say that we entered something like this:

It would remain pretty much the same and the JavaScript would not get executed. This is the correct behavior as, in the noembed tag, HTML special characters are interpreted literally. Now, if we entered something like

The parsing would fail. This is again the correct behavior, because the browsers would interpret the first occurrence of </noembed> as the closing tag despite it being in the CDATA tag. Thus, if something like that passed unchanged, the script would get executed. The actual problem stems from having multiple CDATA tags in a single noembed tag (or other tags that interpret special HTML characters literally). So for example

Considering everything written so far, it shouldn't be hard to combine it into a working exploit:

When parsing the HTML code above, the two CDATA blocks would get merged and, in doing so, a new closing </noembed> tag would be formed. Thus, the noembed tag would get closed before expected, and the content of the script tag would get executed. This is shown in the image below. 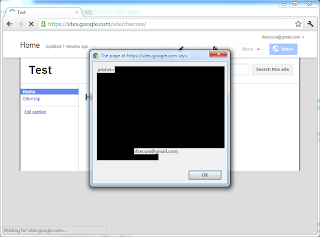 This issue was quickly resolved by the Google security team and now the HTML special characters are escaped even in noembed and similar tags. Thanks!

PS If you thought that my previous post about PRNG predictability in browsers is related to Google, I'll have to disappoint you - you'll have to wait a bit longer to find out just how I used that :-)

The google analytics keyword not provided sometimes so we should keep our focus on that keywords that are most expensive and useful in gooogle.

This is often very a beautiful post. Firstly, i would choose to several thanks for swing stress on but association plays an enormous role in hosting aspect. Fantastic stuff.

Great Article. Thank you for sharing! Really an awesome post for every one.

IEEE Final Year projects Project Centers in Chennai are consistently sought after. Final Year Students Projects take a shot at them to improve their aptitudes, while specialists like the enjoyment in interfering with innovation. For experts, it's an alternate ball game through and through. Smaller than expected IEEE Final Year project centers ground for all fragments of CSE & IT engineers hoping to assemble. Final Year Project Domains for IT It gives you tips and rules that is progressively critical to consider while choosing any final year project point.

Very useful information provided in this blog. concepts were explained in a detailed manner. Keep giving these types of informations. oracle training in chennai

Sharing the same interest, Infycle feels so happy to share our detailed information about all these courses with you all! Do check them out
Best Data training in chennai & get to know everything you want to about software trainings.

Want to do
Data Science Course in Chennai with Certification Exam? Catch the best features of Data Science training courses with Infycle Technologies, the best Data Science Training & Placement institutes in and around Chennai. Infycle offers the best hands-on training to the students with the revised curriculum to enhance their knowledge. In addition to the Certification & Training, Infycle offers placement classes for personality tests, interview preparation, and mock interviews for clearing the interviews with the best records. To have all it in your hands, dial 7504633633 for a free demo from the experts